A question frequently kicked into the long grass by the pensions industry was whether guaranteed minimum pensions had to be equalised between male and female members. If so, how?

GMP equalisation - an answer to a thirty-year-old questions?

A question frequently kicked into the long grass by the pensions industry was whether guaranteed minimum pensions (GMP) had to be equalised between male and female members. If so, how? In the Lloyds Banking Group judgment, the High Court has confirmed that equalisation must be carried out, and provided some guidance on how to achieve this. That is not to say the issue does not remain complex and certain questions have been left unanswered.

The answer – the general principle

Following the Lloyds Banking Group judgment, this issue can no longer be ignored by schemes. The decision makes clear that the differentials in scheme benefits as a result on the inequalities in GMPs cannot be justified.

The answer – but how? 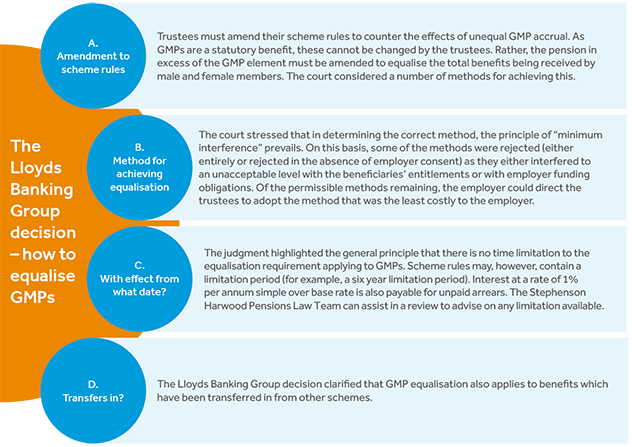 The decision has left a few points unanswered. In particular:

This decision was a long time coming for many in the pensions industry. However, now that it has arrived its impact on funding and administrative practices is likely to be significant. Communications between trustees and employers, and with members, will be key. Both employers and trustees should consider contacting their advisers sooner rather than later to start what will, inevitably, be a complex process.